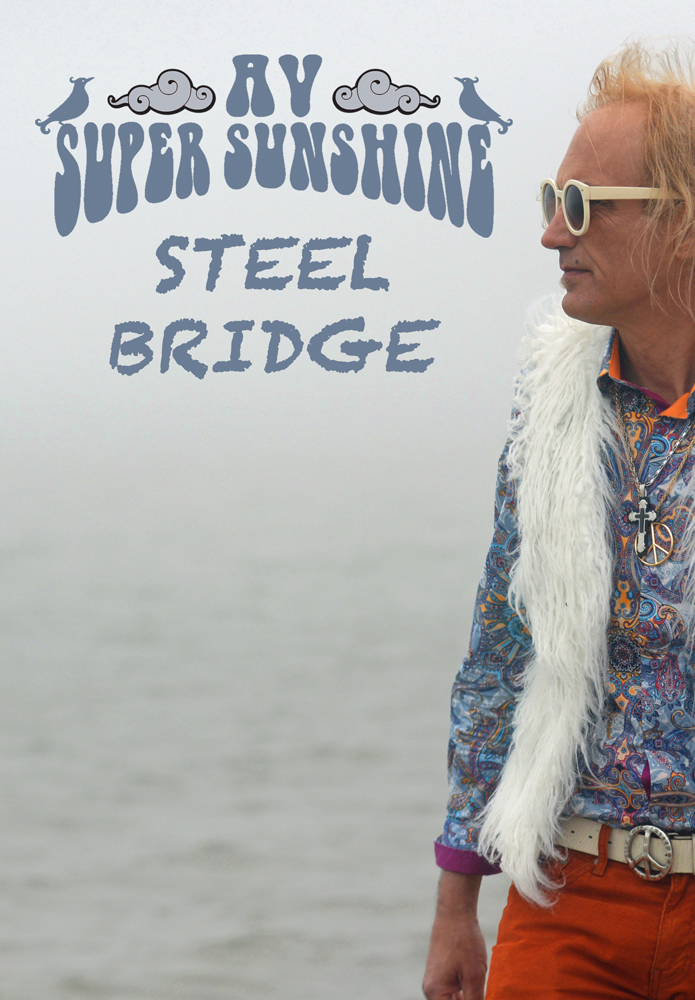 During 2013 the artist AV Super Sunshine recorded 46 different songs, at 3 studios, using 2 groups of musicians, which yielded an EP and 3 full length CDs.  The EP and 2 of the CDs, one of which is still unreleased, were recorded at Ben Folds and House Of Blues both in Nashville, Tennessee.  The third CD, also still unreleased, was recorded at Sweetwater Studios in Fort Wayne, Indiana.

In Nashville the session musicians were led by legendary hit maker Michael Bradford who was brought in by producer James House to handle bass guitar.  This introduction would later lead to Michael producing AV’s ground breaking 2016 “Bass Face”of which “Steel Bridge” is one of the stand out tracks.  More on Michael’s involvement later.

AV’s Fort Wayne sessions where led by American guitarist Kerry Marx.  Among Kerry’s many gigs and the one that intrigued AV the most was his long tenor being lead guitarist for Johnny Cash’s touring and recording band.  As a huge fan of both Cash the man and his style of songwriting, AV was also delighted to discover Kerry was a member of the band which appeared with Johnny on his televised music variety show, The Johnny Cash Show.

AV remembers, “During our first session Kerry told me of his time with Johnny.  A week earlier I was still hosting an open mic in Oshkosh, Wisconsin.  Imagine my delight when I found out I was recording with Johnny’s closest guitarist.  I wanted to bring something special to our next recording session.  Oddly enough, a year earlier I got the chance to play Johnny’s famous Martin D-18, the guitar that he did most of his writing on.  It was while at a Bryan Adams concert in Green Bay, Wisconsin.  Johnny gave the guitar to Bryan before he died and Bryan’s guitar tech let me give it a spin.  I later told Bryan who was as excited for me as I was.  That inspired me to write some “John Cash” influenced songs including “Steel Bridge”, which is the song I brought to Kerry our next session. 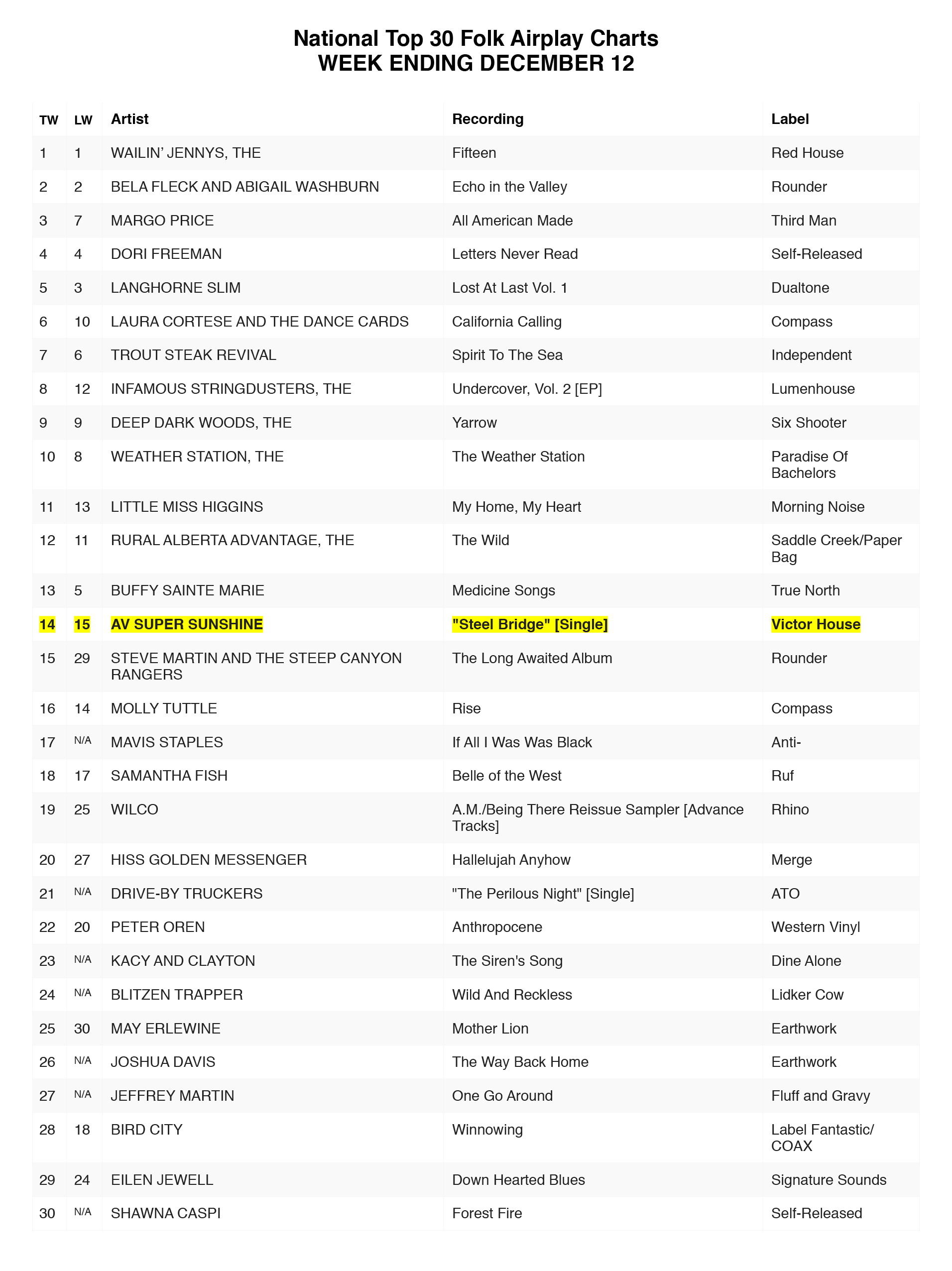 The “Steel Bridge” song theme was inspired by an invitation AV received in 2012 to participate in a week long songwriting collaborative which takes place every June in Sturgeon Bay, Wisconsin.  The week ends with a three day music festival called the “Steel Bridge Songfest”.  The festival started as a grassroots effort to save Sturgeon Bay's historic Michigan “Street Bridge” from destruction.  The "Steel Bridge" has since been protected as a national treasure and the festival has continued to thrive attracting songwriters from all over the country.

Unfortunately, AV couldn’t accept the 2012 invitation.  He had already volunteered to manage a stage at Milwaukee Pridefest which was the same week.  “I had a lot of young LGBT musicians I was helping at my Oshkosh open mic who wanted to play Milwaukee Pridefest.  I reached out to the Milwaukee Gay Arts Center to see if they could help and they recruited me to take over their stage.  Being asked to be on the Steel Bridge writers collaborative is a huge honor for local artists in my area of Wisconsin.  However, I couldn’t say no to my friends or to the center.  As thanks for the invitation I decided to write a “Steel Bridge” themed song to honor both Johnny and the Songfest.”

AV explains the songs meaning, “I wanted the song to be real.  I had been having a struggle with PTSD, depression and anxiety disorder for some time.  I wanted a song that described that struggle so I imagined myself up on that steel bridge pushing against the flow.  Sometimes things are so bad we have to leave the old behind, even if we can’t see anything good on the horizon.  People who struggle with depression will get that. It’s a song about courage.  The kind of song John Cash would sing.”

In 2015, Michael Bradford was brought back to remix some tracks for AV’s first release.  That success led to a decision to record a full length CD together entitled “Bass Face” before releasing anymore 2013 recordings.  AV remembers, “We were recording a group of my rock and pop songs that were to be heavy on Moog synthesizer, a now vintage instrument which Michael is a master.  When Michael heard my “Steel Bridge” song he immediately wanted to record a Moog version of it.  He dug the Johnny Cash influence and wanted to create a recording like Johnny made of the Nine Inch Nails song “Hurt”.

Flash Forward to the present and AV is out doing his thing. His social presence is growing and he has been rapidly expanding fan base all over the world. These “Steel Bridge” recordings show us yet another side on this complicated artist.  I urge you to check out AV Super Sunshine further. Remember, there is more to music than what’s on the radio and Television.